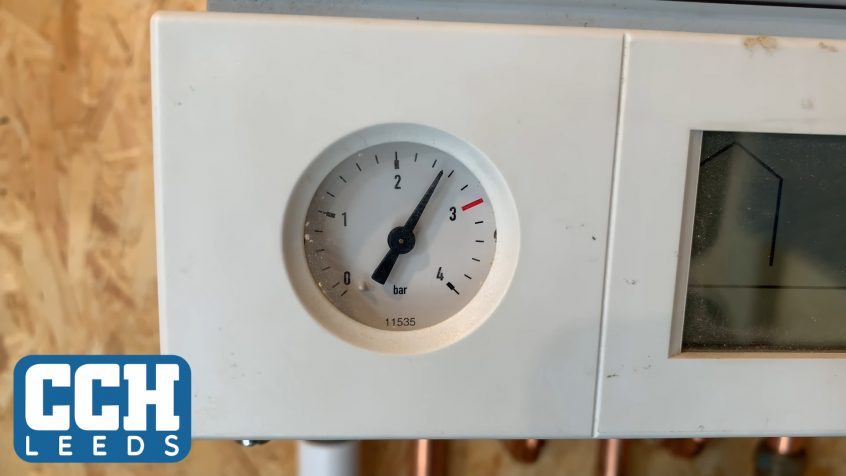 First of all, we’ll look at the filling loop underneath the boiler and we’ll see if that’s been left open. So let’s have a look at that now. When we look at this, we can see this side is open, so that means this here, that should be closed like that, if you can see. And then that one that there is closed as well. If they were both open then they’d be like that and then your pressure gauge would continually just go up all the time.

After you have filled the boiler, normally we would only fill it to about one when the boiler is turned off and the boiler is cold. So if you’ve done it to one, always make sure you turn these back off.

Doing it from a radiator can take quite a lot longer, but what you do is just bleed it, get a jug or something to put under there and then just drain into your jug. You might need a cloth underneath as well because it’ll probably drip. And just be careful not to undo it too much with this key. If you undo the out too much, sometimes that can actually shoot out and then you’ll be in the right mess then. Doing it this way might take quite a while because you’re only taking a right little bit of water out at a time. So what you’ll have to do is do this and then close it, and then go back to your boiler and check. You can always put more pressure back in if you need to, so we’re going to a look at the boiler again now. When we look at the boiler, the pressure’s gone down a little bit, but as you can see if you’re going to do it from a radiator, that’s going to take quite a while.

You could also undo one of the nuts underneath, if you’ve got somewhere where you could undo one of the nuts and you could let some of the water come out a bit. But obviously you have to be really careful with that. Also, it may be that you’ve got a drain off valve somewhere on your system and if you have, you could just put a jug underneath and then just undo your drain off part of it. Obviously that would be on your system like that. So that’s another way that you can take the pressure out of the system.

If you’ve managed to get your pressure back down to one, then what you need to do now is when the system’s cold, you want the pressure to be at one bar. Just round about one bar. And then when you heat the system up, so you’ve checked all valves and everything’s turned off underneath, except one bar, system’s cold, and then you put your heating on and this pressure gauge, it’ll start to go up, but you only want it to go up a little bit. If it starts going back up to over two or a three bar again, then that would indicate you’ve got a problem with the expansion vessel inside the boiler. And it may be that it needs servicing, it just needs the expansion vessel pumping up. It may be that you need a new expansion vessel, but more than likely it’ll just need pumping up.

It could also be that the expansion vessel is undersized for the size of system that you’ve got. So if you’ve got a really large house, then expansion vessels in boilers are only normally seven, eight, nine litres. So they’re not really designed for big massive houses. So it could be that you need an additional expansion vessel.

Do you need a plumber in the Leeds area?

If you need a plumber, or if you require any plumbing advice, feel free to give us a call us on 07725 692699. Alternatively, you can email us at cch@allenhart.co.uk or you can request a quote via our contact form. Take a look here at some of the services we offer. We’ll look forward to hearing from you soon.

We use cookies on our website to give you the most relevant experience by remembering your preferences and repeat visits. By clicking “Accept All”, you consent to the use of ALL the cookies. However, you may visit "Cookie Settings" to provide a controlled consent.
Cookie SettingsAccept All
Manage consent

This website uses cookies to improve your experience while you navigate through the website. Out of these, the cookies that are categorized as necessary are stored on your browser as they are essential for the working of basic functionalities of the website. We also use third-party cookies that help us analyze and understand how you use this website. These cookies will be stored in your browser only with your consent. You also have the option to opt-out of these cookies. But opting out of some of these cookies may affect your browsing experience.
Necessary Always Enabled
Necessary cookies are absolutely essential for the website to function properly. These cookies ensure basic functionalities and security features of the website, anonymously.
Functional
Functional cookies help to perform certain functionalities like sharing the content of the website on social media platforms, collect feedbacks, and other third-party features.
Performance
Performance cookies are used to understand and analyze the key performance indexes of the website which helps in delivering a better user experience for the visitors.
Analytics
Analytical cookies are used to understand how visitors interact with the website. These cookies help provide information on metrics the number of visitors, bounce rate, traffic source, etc.
Advertisement
Advertisement cookies are used to provide visitors with relevant ads and marketing campaigns. These cookies track visitors across websites and collect information to provide customized ads.
Others
Other uncategorized cookies are those that are being analyzed and have not been classified into a category as yet.
SAVE & ACCEPT